The Royal Air Force Air Cadets are pleased to announce that back by demand the next ‘Exercise Blue Ham’ will be held on the MoD 5MHz (Shared) Band over the weekend of 6th & 7th June 20; be assured that we will have plenty of call signs available for amateurs to work over the period of operation using SSB Voice and Data Modes. The exercise is for Full License holders only but by all means listen in to get a flavour of the exercise and the way it works.

All the exercise details can be found at https://alphacharlie.org.uk/exercise-blue-ham

Foundation Course kicks off at HARS

On Sunday 12th Jan 2020 Huntingdonshire Amateur Radio Society (HARS) ran a Foundation License
Practical Assessment and Exam day at Buckden Village Hall, Cambridgeshire for three Candidates
that had put the time in at home and self -studied.

Four Club members arrived early on in the day to set up the Morse test equipment, VHF/UHF base
station plus antenna and not one but two HF radio sets ups, one with external antenna and one
located in a different room with a dummy load attached, all the kit was checked and we were ready
to start the day. All the practical assessments were run in-line with the Foundation Syllabus
Numbers 10A1, A2, A3, A4, A5 and 10B1.

The candidates soon proved themselves as they progressed through their assessments starting with
the Morse receiving test then it was onto the Sending element all good so far. Next the group were
briefed on the FM Simplex element and what was required to complete the assessment this enabled
them to pass their details to a FM station located in the car park, they all took turns operating on a
one to one basis with ‘on air’ transmissions. The group progressed next onto the SSB HF assessment
with each candidate operating again on their own working with the other HF station in an adjacent
room. During the SSB HF session the two other candidates completed the adjusting the length of an
antenna for the lowest SWR. Once they had all completed the two tasks it was onto matching the
antenna on a HF station. All the practical parts were completed in a reasonable time frame which
meant the Team could then pack away all the kit used during the assessments so that the tables
could be set out for the final exam to take place. All the candidates had elected to complete the “on-
line exam” which meant we had to have a clear room with no technical prompts for them to use to
answer any of their questions.

One by one they left the exam room and came through into a spare room with a big smile on their
face and “saying yes I passed”. Well done to all the candidates and staff for putting the time in over
the day, providing the training, assessments and the added info which should give them a good start
to their hobby and interest in radio communications and well done to Vicky M7TAL, Sai M7TEM and
David M7TAD. 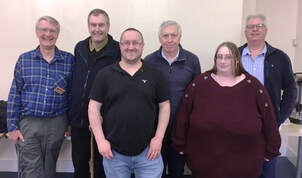 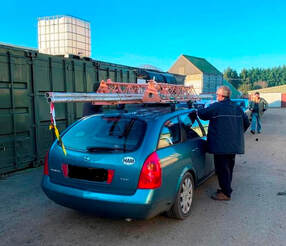 The Transportation of a Mast from Godmanchester to Glebe Farm took place on Wednesday 4th December. Thanks to Steve (G1KWF), Malcolm (M0OLG), Alan (M0FDA), David (M0SKT) and of course David (M0VTG) who supplied the wheels (hope springs are still OK on car) 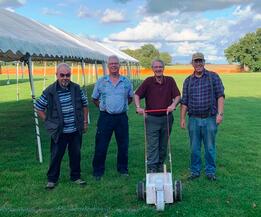 Steve (G1KWF) would like to thank Malcolm (M0OLG), David (M0SKT), David (M0VTG) and Mervyn (G4KLE - on Camera) for helping with the White Lining and Fence erecting for the RRM Plough Day & Country Fair which takes place on Sunday 29th September.

The WX was kind to us and we managed to achieve all tasks handed out by Steve, G1KWF.
​
More details for Plough Day:   https://ramseyruralmuseum.co.uk/plough-day/

Word soon got round which sparked a bit more (pardon the pun) interest in the course to the fact that seven members were ready to join in on the 2017/02 course which started in Jun 17. The small group met several times on a Wednesday night at a local pub for the purpose of exchanging notes, chatting about each other's findings of the first couple of modules and having some liquid refreshment, although this it was a good idea we soon realised that instead of meeting as a group it was far better to spend the time studying and talking over anything which needed extra coaching or information we would use a local UHF frequency, so the Tuesday Tech Talk Net was born using the GB3OV Repeater this being chaired by David M0VTG. This helped out many of the candidates achieve a better understanding of some of the modules as they could gain quite a depth of knowledge and experience from other club members live on air. After completing the modules, assessments and mock exams during the course, the candidates were ready to take their exams in early January 18 at the local exam centre in Peterborough, this went ahead in between the bouts of winter weather we had then the wait for the results to be posted in about two to three weeks time began.

Not to be outwitted and whilst the Advanced Course was going on two of the new club members agreed to sign up and take part in a weekend Foundation course run by the Peterborough Club (PADARC) which they successfully passed and so they applied for their M6 callsigns. Not to be left out two of the other regular members who had M6 callsigns already vowed to take their Intermediate Course which would be held again by PADARC over a weekend. The feedback was that they had passed and obtained their 2EZero callsigns.

So as the HARS Club entered into Mid February with the tally of 10 members who had successfully taken part in various courses during the second half of 2017 with one Advanced to still take his exam at the end of April 18.

Talking to the each group of candidates many said how they had learnt many new skills, levels of  knowledge and were pleased at other meeting people with the same interest and that it would set them up for a very enjoyable hobby in Amateur radio in the coming years.