I have enjoyed radio since the age of seven it all started with making a homebrew crystal set which I was able to buy the parts from a TV Repair shop local to my home QTH - do you remember the type of shop! I used a set of military surplus headphones which I was able to listen to the stations fade in and out on the AM Broadcast Band as the day roles into the evening.
In the early 1980's I took up SWL and spent many years following Mike Richards column in 'The Short Wave Magazine'  and began decoding HF Weather FAX, SITOR,RTTY and CW, I built one of the first HAMCOMM decoders (ex BADGER BOARDS) running both HAMCOMM 3.1 and JVFAX v7.0 software on early generation PC's, I now use the Ham Radio Deluxe - DM790 decoding software, WSJT and Fldigi for FT8, PSK31 etc.

I have had the pleasure to run Radio Training sessions and Radio Field Days at my local Royal Air Force Air Cadets (RAFAC) Squadron in St Neots for many years, the squadron headquarters is listed as an RSGB Examination Centre which gave the capability to run Foundation Courses in 2012 for the local cadets. I am currently the Central & East Regional Radio Communications Officer for the RAFAC providing support, advice and training to all personnel who require it and Exercise Co-Ordinator for the very popular Exercise Blue Ham on the 5MHz Shared Band. One of my main tasks at the moment is to continue to develop the Advanced (Silver) Operator VP Module for the RAFAC with the ACP 46 Foundation Equivalent Licence Module.

I have been a licenced radio amateur since Dec 2010 at RSGB Foundation Level when I attended a course run by CDARC with RAFAC Cadets from the St Neots Squadron. I enjoy deploying my HF radio kit out in the field as well as on my holidays, I have made many contacts when along the coastline of the UK. HF wise when out portable I utilize a 10 Mtr PROWHIP Vertical Antenna with an LDG Z11-Pro II ATU and my trusty FT-857 or FT-450 which I find works very well across the bands with many QSO's being made and enjoyed. Success in July 16 has been with a 10 element MASPRO Yagi and a 2 Mtr SSB rig working portable on the tripod mast with the 'Armstrong Rotator' which bagged me a GM station plus many others, well pleased! Dig out your old 2 Mtr kit and have a go working portable.... it is great fun.

I enjoy contacting the Special Event Stations which are put on across the globe by various individuals and organisations, I know from experience what it takes to put these stations on and what fun they are to operate.  From April 2013 I have had the pleasure of organise and operate two Special Event Stations - GB0WY at RAF Wyton in April for the RAFARS/Air Cadets Airfields On The Air and GB2DWM - National Mills on the Air all with grateful assistance from members of the local radio club, HARS.
I passed the RSGB Intermediate Course in February 2015. To further meet my interest in amateur radio I enrolled into the Bath Distance Learning Advanced Course in July 2017 and passed my Advance Exam on 13 Feb 2018 and obtained my new callsign MØSKT on 22nd Feb 2018. 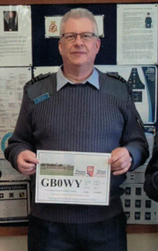